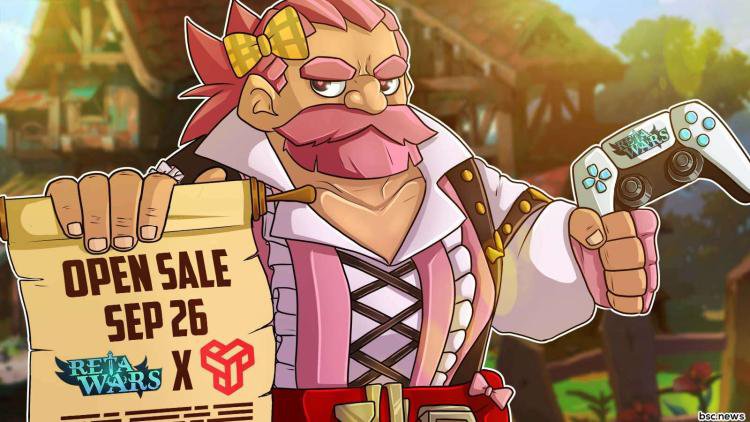 Following a successful Open Beta, Reta Wars has revealed exciting plans ahead of its v1.0 launch.

After a successful Open Beta (OBT), play-to-earn strategy game Reta Wars has finally confirmed its official launch plans. The launch will commence with an open sale that will last for one week, starting from September 26, followed by the gameplay launch precisely one week later on October 3.

Reta Wars 1.0 launch will include RETA staking and trading of GRT, allowing the community to dive fully into the GameFi ecosystem with RetaWars.

In order to protect the rights of NFT holders and sustain the challenge for new users, Reta Wars has chosen a “Flexible BUSD’ policy in the regular sale of Reta Wars 1.0. This policy will see the selling price change in proportion to the total amount of NFT issued in the Reta Wars Hero Contract.

In simpler terms, the regular sale price will increase as the total amount of NFTs issued in the Hero Contract increases. On the other hand, if the total amount of NFTs issued from the Hero Contract decreases, the regular sale price will also decrease. Players, also known as commanders in Reta Wars could burn NFT heroes for a number of reasons. In the last Open Beta, 2496 NFT heroes were burned within two weeks.

The flexible pricing is aimed at protecting buyers from potential damage.

Promotions During the Sale Week

In celebration of the Reta Wars 1.0 release, the team has prepared a sale promotion that will run for one week. Players will be able to purchase a random NFT Hero for 250 BUSD, starting from September 26. In addition, there will be two other promotions during the sale week.

The first is “attractive referrals,” which allows users to share their referral addresses across social media. Users who participate in the open sale through a referral link would get an added special discount to purchase the NFT Hero at 200 BUSD. Referrers will also enjoy perks like getting additional free NFT opportunities.

The second promotion will be for the first three “lucky players” who have obtained a Legendary Rank Hero as they will receive an additional Legendary Soul.

The promotion will be followed by the official launch of Reta Wars 1.0, ushering users into a new world of GameFi.

Ahead of the big launch, Reta Wars will attend the Tokyo Game Show 2022 (TGS2022) in partnership with YGG Japan - the Japanese subsidiary of one of the world’s largest gaming guilds, Yield Guild Games (YGG). Tokyo Game Show is one of the world’s most popular and historic gaming exhibitions held annually in Japan every September. This year’s event will run from September 15-18. Kickstarting a historic moment, the team will have a great opportunity at the exhibition to present Reta Wars to a large global audience, including blockchain media and investors.

Reta Wars has completed two presales and two Beta tests and is finally set to reveal its actual product to the world, starting with the stage at the Tokyo Game Show 2022.

What is Reta Wars:

Reta War is a “war-to-earn” GameFi that aims to achieve good results by forming and managing one’s army made of NFT assets. It contains elements of strategy simulation to foster and deploy key NFT assets and obtain greater rewards if the faction you belong to wins the war.

Learn more about Reta Wars via the following links: