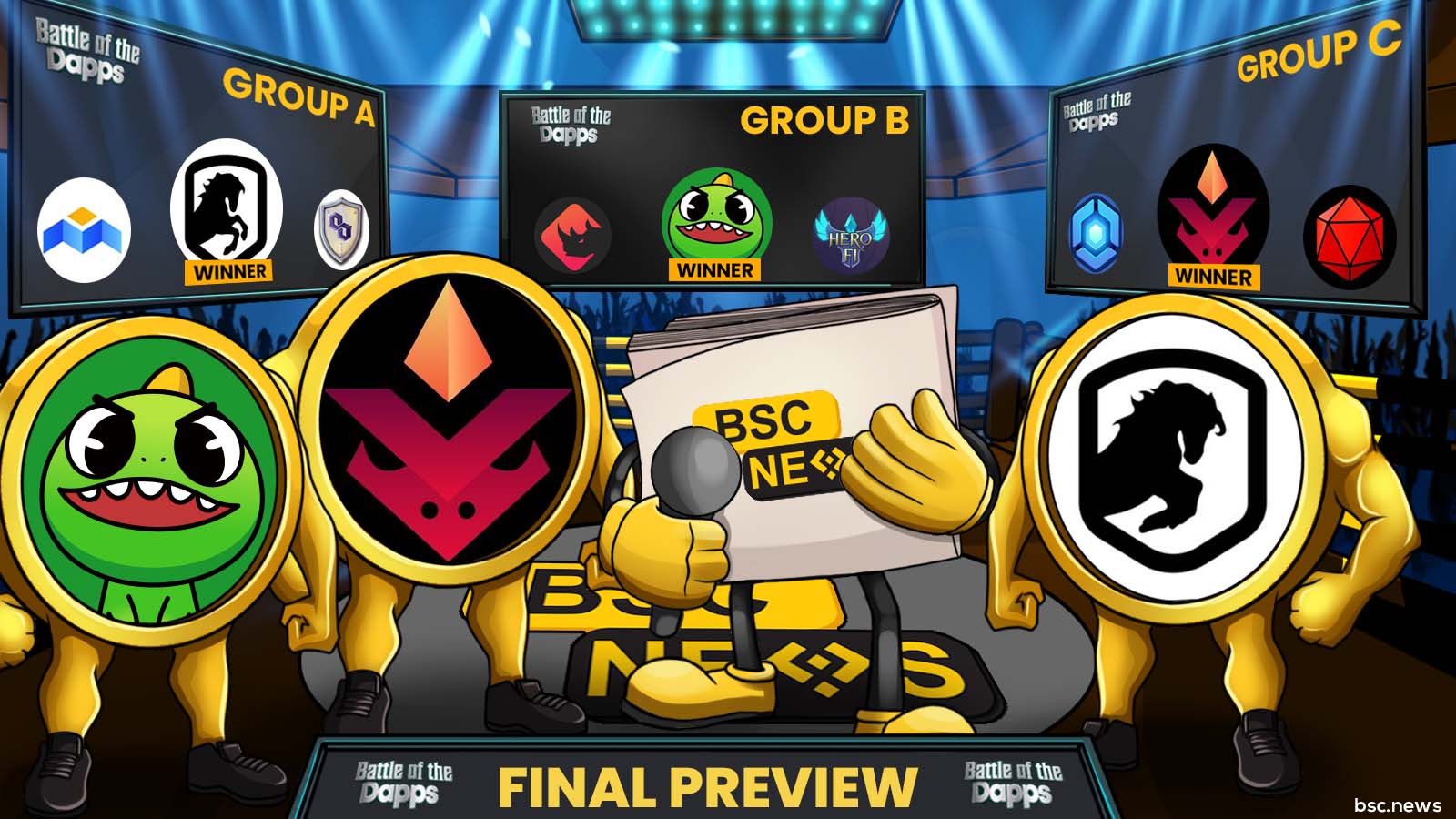 The final culminates an exciting moment for Binamon, BSC News, and the whole BSC community.

The Battle of the Dapps is over, and Binamon has emerged King of the Dapps from BSC News. We saw a last-minute judge change, technical difficulties from Yooshi, quality responses across the board, a record number of Twitter votes, and more! The month-long event came to a rousing finale.

Through each round, the three reps–– Adomas, the CEO of Derace; Binamon COO Sol; and Vicky of Yooshi––engaged in impressive back and forths. The Yooshi community dominated the poll with 62% of the vote, but the final winner needed to win more than just the Twitter poll. Both judges felt that Binamon impressed the most, giving Binamon a 2-1 win.‍

“Thank you once again to our community, BSC news and our fellow competitors. We are delighted to have been crowned 'King of the DApps' and look forward to our #metaverse expansion,” thanked the Binamon Twitter account after winning.

The event winner will receive some special support directly from Binance Smart Chain and BSC News soon.  Binamon has been on a tear as well, winning a place in the MVB III Monthly All-Stars for October. An impressive run of feats for the digital monster game.

“Congratulations @binamonok, you're on a winning streak Flexed biceps -MVBIII Monthly Star for October -King of the dApps by BSC News.”

With Jake the BSC News DJ pumping in some hot hip-hop tracks in the Twitter spaces to over 360 listeners, the scene was set for an exciting spectacle. Andrew, the BSC News host, kicked off the event as the starting bell got everyone ready to rumble.

The community came out in massive support with over 14,000 votes tallied in the Twitter poll––a record for all rounds. Binamon held the lead much of the way, but a massive swing of votes turned the tide for Yooshi in the end. The giant swing caused some to believe bots were used to support Yooshi.

The Twitter voting metrics made the flip quite exciting as a few thousand votes rushed in at the last second for Yooshi; upon refreshing the poll page at completion, Yooshi jumped ahead of Binamon for a last-second win in the Twitter poll.

The winner needed more than just the Twitter poll, unlike the previous rounds. Unfortunately, the Yooshi representative battled technical difficulties, seemingly giving Derace and Binamon a clear shot to impress the judges.

Two of the co-founders of BSC News sat in as judges for the event. Greg, Goon Trades, and substitute judge Ben were impressed by all the participants but ultimately decided on Binamon. ‍

“In the end, I was most impressed with Binamon and Sol’s presentation of their goals beyond what they are doing right now,” said Greg in his spiel. “The project has a big vision, and they look to be able to sustain those goals.”

Looking Ahead with Binamon and BSC News

A deserving winner with a passionate performance across all three rounds, Sol represented the Binamon community well and gave much to expect in the future. ‍

“It was an awesome battle! Thanks to all the community and to the team of @news_of_bsc,” tweeted Binamon COO and event representative, Sol. ‍

Stay tuned for more events from BSC News on the horizon. We have AMAchellas, Traders to Gamers, and more coming down the pipeline. We continue to strive to be the top spot on the web for all things Binance Smart Chain.